The Coronavirus pandemic has meant most VE Day celebration events have had to be postponed or cancelled this year. However, there are still a number of ways you can pay tribute to those who fought for our freedom from the safety of your own home. 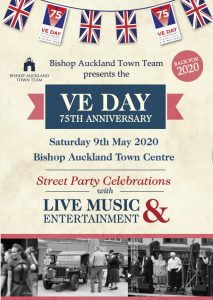 In 2020, the Bishop Auckland Auckland Town Team will be hosting a special day to celebrate the 75th Anniversary of VE DAY on Saturday 9th May 2020.  There will be a variety of music and entertainment, along with street party celebrations.

More details of the entertainment and activities will be announced closer to the day.

Victory in Europe Day, generally known as VE Day, marks 8 May 1945, the day on which World War II in Europe ended.

In the United Kingdom on 8th May 1945, more than one million people celebrated in the streets to mark the end of the European part of the war. In London, crowds massed in Trafalgar Square and up the Mall to Buckingham Palace, where King George VI and Queen Elizabeth, accompanied by Prime Minister Winston Churchill, appeared on the balcony of the palace before the cheering crowds.

VE Day is celebrated and remembered by people around Britain each year. The 70th anniversary of VE Day in 2015 was marked with a series of events across the UK. There were three days of commemorations including parades, street parties, a service of thanksgiving and a concert in central London.

8th May 2020 will mark the 75th anniversary of VE Day, which will be another occasion of celebrations. A number of events will take place over the weekend and will play a leading role in the anniversary of such a momentous occasion.