A spectacular and colourful nativity scene, featuring 24 life-size models, is now on display at St Peter’s Chapel in Auckland Castle.

All the models, made by schools and community groups had been on display in shops and businesses for Bishop Auckland Town Team’s Advent Windows initiative. On Christmas Eve morning more then a hundred people gathered at the Stan Laurel statue at the start of a parade through the town.

As the crowd processed along Newgate Street, the Newgate Shopping Centre and Fore Bondgate, each model was collected from its shop and greeted with cheers and the sound of rattles kazoos and whistles which had been provided. Carol singing took place at various points. 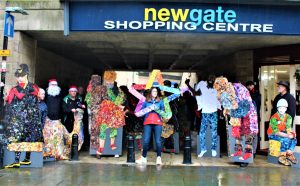 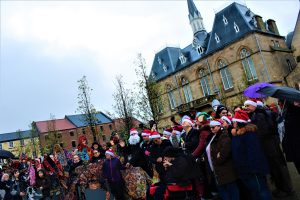 On arrival at the castle, all the models were assembled on the altar steps at St Peter’s Chapel and Paul Butler, the Bishop of Durham, revealed the last model of the infant Jesus which was placed in front of the contemporary models of Jesus and Mary.

The models include representations of the famous paintings of Jacob and His Twelve Sons by the Spanish artist Francisco de Zurbarán which are housed in the castle. All of them have been ‘cast’ as shepherds, wise men and other characters from the Christmas story.

Other unusual features include and African Angel Gabriel and a lion, associated with one of the sons, Judah as well as a camel, donkey, dog, goat and lamb. The AlterNATIVITY scene is on view inside St Peter’s Chapel from now until Sunday 5th January before Auckland Castle closes for work on the grounds until mid-February.

The project is funded by Northern Heartlands through County Durham Community Foundation and other generous donors and is also supported by The Auckland Project.

For more information contact David Pott on 07932 790525 or email badventwindows@gmail.com