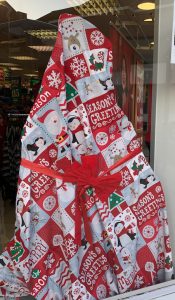 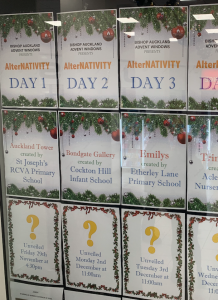 Every day during December, a life-sized figure which has been created by either a school or group is unveiled in the shop window to create a giant advent calendar.

13 of the 24 figures have been modelled on the Zurbarán – a collection of life-size paintings of Jacob and his 12 sons by Spanish artist Francisco de Zurbarán at Auckland Castle. Along with other figures and animals including a donkey, lamb and a lion will represent characters from the Christmas story. The first window revealed was at the Auckland Tower during Bishop Auckland Town Council’s Christmas lights switch on event. The colourful model of Joseph, the son of Jacob, was made appropriately by St Joseph’s RCVA Primary School.

Joseph, who was the governor of Syria is starring as Quirinius, the governor of Egypt who carried out the census which set Joseph and Mary off on their journey from Nazareth to Bethlehem. The window was unveiled by Dr Bob McManners and his wife Stefa who have a close association both with the Zurbarán paintings and the school.

Pupils at the school said; “When we first heard we were making Joseph for the Nativity, we thought it was our St Joseph, but this is another Joseph – one of the sons of Jacob. We really enjoyed learning about this Joseph and despite our sticky hands, we enjoyed making the figure with Laura.” Sue Snowdon, Lord Lieutenant of County Durham opened the window at Bondgate Gallery on Day 2, which featured a model of Levi starring as Zechariah, the High Priest and father of St John the Baptist the cousin of Jesus, made by Cockton Hill Primary School.

Mrs Snowdon said: “This is a rather special project which gives children a real understanding of the importance of Advent, a wonderful time when we prepare for the Nativity of Jesus at Christmas. Today really was a celebration and I was delighted that I could be part of it.”

Contemporary models of Joseph and Mary were unveiled at over the weekend of 7th and 8th December. 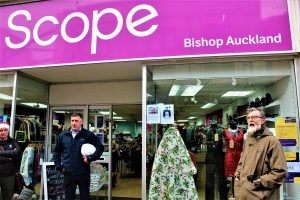 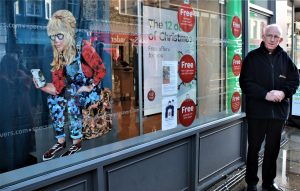 A hard hat builder ‘Joe’ was revealed by Ian Black, project manager of Meldrum Construction, and Mary, taking a photo on her mobile phone of Jesus ready to share on social media, was unveiled by Father Dennis Tindall.

David Pott, coordinator of Advent Windows, said: “Joseph is described in the Bible as a carpenter, but the original word used implies a handy man who would have used stone as well as wood and was a house builder. It makes sense to portray a contemporary Joseph in this way, especially with all the great work Meldrum Construction are doing in building the new visitor attractions here.”

They will continue to be unveiled until Christmas Eve when they will be collected and paraded through the streets to finish at Auckland Castle.

The great Christmas Eve parade will start at 10.30am at the Stan Laurel statue, on the corner of Princes Street and Newgate Street, and end at St Peter’s Chapel in Auckland Castle.

The AlterNATIVITY scene will be assembled and the final model of Jesus and the crib will be unveiled by The Bishop of Durham. It will be on view in St Peter’s Chapel until Sunday 5th January 2020.

The Advent Windows project has been organised by Bishop Auckland Town Team with support from The Auckland Project, Daisy Arts and artist Laura Brenchley who has held workshops, and is funded by Northern Heartlands through County Durham Community Foundation and other generous donors.